Skip to content
Have you ever noticed that a winning poker mindset seems to come naturally for some people? I know I have. Are some people simply born with a winning mindset gene or did they learn it as a child?
Yesterday, I received a copy of an old black and white photo from one of my cousins. It was taken of four women, and it took me a few moments to recognize my mother, her two sisters and my Grandmother. I’d never seen the photo before, and it started me thinking about how our family upbringing affects our mindset in both our lives and at the poker table.
I’d like to share this 1953 photo with you.

I instantly recognized my grandmother Lillian; however it took me a little while to figure out the other three. Lillian is to the far right standing next to her three daughters.
My Aunt Mary is the bride in white; my Aunt Matilda is the shortest of the three young women, and my mother, Mama Peggy is to the far left.
My grandmother is wearing her Sunday-go-to-meeting clothes– her wide brim hat, her shirt waist print dress with the white collar, white gloves, and her black lace-up shoes.
Even though you can’t see the shoes in the photo, I know that’s what she was wearing on her feet. She only had two pairs of shoes– her Sunday shoes and her everyday work shoes.
Her Sunday shoes had big chunky heals, very fashionable by today’s standards. Despite only having two pairs of shoes, I never heard any words of lack out of my grandmother’s mouth.
I called my grandmother Lillian, Grandma, and she was instrumental in helping form the person I am today. She had an astonishing work ethic, was tireless and learned child rearing from raising 10 children. Mama Peggy was born in 1926 and raised during the Great Depression. 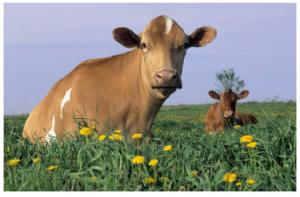 Grandma was up before sunrise every day of the week milking cows and finished her day reading the Bible by the light of the fire from the hearth that warmed her bedroom. Mama Peggy said they had from 10 to 20 dairy cows that they milked twice a day. They were mostly Guernsey cows noted for the high butter fat in their milk.
Cows never took off weekends or holidays. They only took off when they ‘went dry’ and stopped producing milk, which usually happened just prior to breeding.
During the Depression, Grandma and the girls bottled the milk each morning, and Grandpa delivered fresh bottled milk, buttermilk, homemade butter as well as fresh eggs to folks in town. They sterilized clear glass bottles for the milk and capped them with small white cardboard discs.
As far back as I can remember, ‘going to town to

shop’ was called ‘going to trade.’ That’s because when Grandpa took the milk to town during the Depression, most people didn’t have money to buy any of the farm produce so they traded whatever they had for it. Many times people would trade their labor for the milk and eggs, and come back to the farm to work for the day. Their bonus was they sat down with the family for the midday meal.
Grandma worked hard in the fields all day, breaking only to come into the kitchen to make hardy meals for her clan. She called the middle meal of the day ‘dinner’ rather than lunch, and it was always the biggest meal of the day. The evening meal was called supper.

Mama Peggy is now 85 and shares our home with us. I asked her to tell me about the black and white photo above. She sat down in the big arm chair by my computer and gazed into space for a while, furrowing her brow as she searched for the memories:
“We lived in Oak Ridge, Tennessee, and your dad drove a bus at K-25 (one of the nuclear plants). Just before Mary’s wedding, we drove the three hours home to the country.” (That’s what she always called where she was raised, ‘the country.’)
“Your Grandmother was in the garden hoeing when we arrived. We told her we didn’t have the money to drive the 500 miles to Mary’s wedding. She instantly threw her hoe down and started toward the house. She said, ‘I have the money. You have the car. Let’s go.’”

That made me chuckle. I could see Grandma lean forward as she marched to the house. She never just walked. She always took off with a purpose, with an intention.
When Grandma said, ‘I have the money,’ she might have had as much as $25 after the sale of a few calves. They lived off the bounty of the land and seldom had any cash money. The two times they had money during the year was when they took calves to market in the late spring or summer and when they sold their tobacco crop in winter.
Now that I think about it, I’m sure that my grandmother’s ability to make a quick decision and take action despite her financial situation rubbed off on my mother. Mama Peggy, in turn, affects the way I look at life today, and ultimately how I compete at the poker table. I am so grateful that both women contributed to the winning poker mindset that is second nature to my thinking.
Here’s a thought that just made me smile—maybe I’m channeling my Grandmother Lillian when I’m courageous at the poker table and willing to take action regardless of the cards I’m holding.
If Grandma had played poker and found herself with a short chip stack, I know she would give off energy of power and have a winning poker mindset. If you look up ‘tower of power’ in Wikipedia, you might just find a photo of my 5’0” Grandmother Lillian. I still look up to her today.
Who are the special people in your life who have helped you be stronger at the poker table? They don’t have to be blood relatives to contribute to your poker mindset gene. Please leave a comment and tell me about them.
Until next time, remember my mindset motto:
Play the cards life deals you as if you’ve already won.
Donna Blevins MindSet Coach
Dean of Poker MindSet Academy

10 thoughts on “Winning Poker MindSet – What My Grandmother Taught Me”