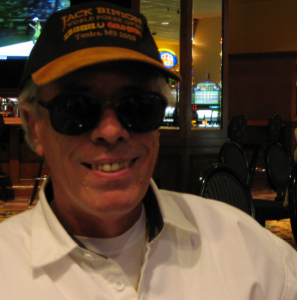 As a Poker MindSet Coach, I'm always looking for what makes a poker player who he or she is at the poker table. On Veterans Day, I'm reminded of the stories my husband, Gregory Weitzel, has told me about his two tours in Vietnam in 1966-67. Those experiences have certainly helped fashion his poker game, because poker mirrors life.
You likely know that I am very tall (there’s a clue in the header of this blog), but you may not know that Gregory is not. Even tho’ he is 5’3 on a tall day, compared to my 6’5, he is truly one of the few people I look up to in this life.
Each of us has had our own unique experiences because of our size. Mine I’ll talk about another day. Today, I want to honor my Veteran husband, Gregory, and share with you how he served his country nearly 50 years ago, and how his size figured into his service. I’ve often thought this experience helped fashion him as one of the most fearless poker players I've ever seen because it tested his courage; it certainly set his character as a man.
Here’s a brief history lesson. Underneath the Vietnam countryside there was an extensive complex of tunnels. During the course of the war, the Viet Cong had built this complex, which served many purposes– from troop movements, storage of munitions, even passageways to underground meeting rooms. This was literally a complex of tunnels, not just a single tunnel here and there. They were everywhere.
Because the average North Vietnamese soldier was very small and weighted only 105 to 110 pounds, the tunnels were also naturally small. The American soldiers, who were ‘volunteered’ to clear the tunnels, were also physically the smallest. Gregory was one of those solders. They called them tunnel rats.

When Gregory crawled into a tunnel armed with only his 45 and a flashlight, he faced the immediate danger of booby traps and ambushes, along with the natural threat of dangerous jungle creatures. Eventually it was discovered that even tho’ a tunnel rat was fortunate enough to survive the war, his worst enemy stayed with him– the residue of the deadly Agent Orange used to defoliate the heavy undergrowth along with the toxins they dropped down the tunnels prior to his entry.
The thought of going down into a small, dark hole full of venomous snakes, rats, spiders, scorpions and bats makes me shutter. The concept of facing active battle in this confined space is beyond anything I can imagine. Maybe that’s one of the reasons Gregory is the poster boy for "courage under fire" at the poker table.
I am a lucky and blessed woman. Today, Gregory and I share our home with my 85-year-old mother, Mama Peggy. She and I shout out a “THANK YOU!” from the bottom of our hearts to Gregory, to my brother David, and to every other Veteran with this video of our national anthem. It's sung by a 9-year-old girl.
Turn up your speakers and prepare to be touched.
Donna Blevins
Poker Mindset Coach
Dean of Poker Mindset Academy