I am proud of my roots in the Appalachian Mountains of Virginia. I grew up in a coal mining camp, 15 miles from where this log cabin once stood. (If you want a better look at the photo, click on the link above and it will open up. My mom is Peggy Reasor Blevins, the little girl, second from the right.) 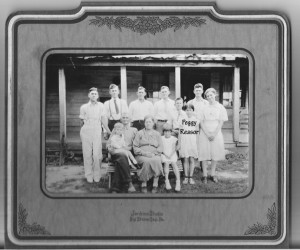 This past weekend, it was poker for me, and visiting with family for my mom. She traveled with me the three hours across Florida to Orange Park where I had a blast playing in the No-Limit Hold'em Tournament while she spent time with one of her two surviving brothers in Jacksonville.
When we left to come back home Sunday, I noticed this photo carefully wrapped in a towel in the top of one of her bags. As far as we know, it is the only existing picture of her entire family: her mother (Lillian Marian Fugate), her dad (James Hopkins Reasor) along with my mom (Peggy Reasor) and her 9 brothers and sisters.
We figured mom was likely 8-years-old in this shot, which puts the photo around 1934. That makes grandmother 45-years-old with 10 kids! No wonder she looks weary in this photo. (Think about that the next time you whine about how long it takes to get to the money in a poker tournament!)
My grandmother was born in 1889 and was an amazing woman with a strong work ethic. In those days, even though there were few choices for young women, my grandmother finished school at the age of 16 and went on to college.
On Sunday afternoons while at LMU (Lincoln Memorial University), grandmother rode an ole' white mule the five miles from her home to the University. Then, on Fridays after classes, she rode the mule back home so she could help with the chores over the weekend.
She eventually met and married my grandfather, who was a traveling dry goods salesman. They literally homesteaded a mountain. It was treacherous terrain with little flat land for crops, so they raised milk cows and had the allotted tobacco patch each year.
My mother, whom everyone calls Mama Peggy, is now 83. She grew up during the Great Depression, and mom tells stories of getting up before daylight to milk the cows and bottle the milk. Grandpa would go to town each day to deliver the fresh milk and "trade."
Even in those days, Mama Peggy remembers her dad playing poker with farm hands until the wee hours of the morning. I wonder if he played my way…
If you can't raise, don't call.
Donna Blevins
Poker Coach, Speaker and Consultant
Looking for poker training, pure and simple?
Then, reserve your seat at my next live, poker coaching program. It is unique, based on what you want to learn, and will help you take your game to the next level:
Poker Pure and Simpletm