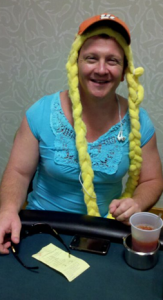 Please leave your opinion about men playing in women's tournaments… yes, no, who cares… what is on your mind? I'm looking for response from men and women. I'll publish the results in an upcoming post.

Men playing in women's poker tournaments… there is a lot of buzz this week. From the dozen or so men that competed against 1048 women in the 2011 WSOP Ladies Championship… to the 4 men, who competed against 17 women poker players, in Daytona Beach, Florida, this past Saturday.

Meet good-natured Mr X of Tampa. When he sheepishly walked up to the table, the journalist in me came out. I asked him if I could publish his picture, his name, and his story. He readily agreed. (However, since the post came out, he asked me to remove his name from the blog. I gladly complied. He is now Mr X.)

Mr X lost a bet, which resulted in him dressing up in yellow pig tails, blue blouse, and fake boobs to compete in the Daytona Beach Kennel Club LIPS "Luck be a Lady" monthly event.

(Note to myself: I have to talk to this guy after the game about dressing for success and table image.)

I was seated in seat 5, which gave me a good vantage point from which to watch his play in seat 10. As players go, my first impression was that he was being timid with his play. I was unsure if that was his normal style of play or if he was just uncomfortable.

After about 10 minutes of play, another man walked up to Mr X, shook his hand, and apologized for not getting there on time to also buy in. Since there was a vacant seat beside Fredo, several of us chimmed up all at once and said, "There's still time."

In a few minutes, he returned with his yellow receipt and took his place beside Mr X. The second hand the new guy played, he busted out. First person out.

Just into the second level, another man came up to Mr X making fun of the first guy out. Again, as if it were planned, several of us spoke up simultaneously.

He did. A few hands later, he was the second player out.

Green chips were colored up. We moved into the third level.

Mr X had limped a few times and folded after the flop. Once he raised 3X the big blind in mid position and everyone went away. He pulled in a small pot.

A while later, I was in the big blind. There was a limp, limp, and Mr X raised 3X the big blind. The button called and so did the small blind. That put a total of 12 big blinds into the pot before the action got to me. I looked down to find Q4 diamonds, which would normally jump out of my hand and sail into the muck.

At this point in order to call, I only had to put 2 big blinds into a pot that already contained 12 large blinds, giving me 6 to 1 to call. My read on the two players behind me was that they would likely just call without raising. I called, and so did they. There were six players in the pot.

As Mr X watched the board intently, the flop came 4s 7s Qh. I saw no flash of recognition from him, nor on the two other players I could see. However, I could not see two of the other players in the pot that were to my left.

It was checked all the way around to him. He bet roughly half the pot. The two players between Mr X and me folded. There are two additional players behind me.

I raised 4X his bet. Fold. Fold. He sat with a dazed look on his face and reluctantly folded.

Shortly after Mr X busted out as the third person out. When I asked him what I could tell everyone about his experience in the tournament, he said, "Tell them it was brutal!"

The fourth man in the tournament was out shortly after that.

What is your opinion about men playing in ladies poker tournaments?

Please leave your opinion below.

Until next time remember my motto:

When you can't raise, don't call.

15 thoughts on “Men in Ladies Poker Tournaments… Your Opinion?”