Jonathan Little joins Donna Blevins, your poker mindset coach, to talk about how he’s created a tournament winning career, alongside a teaching career on FloatTheTurn.com. They’ll focus on converting your online game to the live game, and Jonathan is a great resource for this with over $1 million in online winnings. 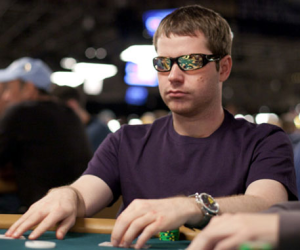 Jonathan Little at the table wearing his reflective sunglasses.

Correction: the cost of Jonathan’s FloatTheTurn.com website membership is now $10 per month.

As Jonathan has made it his goal and career of winning tournaments, a few notables include winning both the World Poker Tour’s Season VI Mirage Poker Showdown in 2007 winning just over $1 million dollars, Season VII Foxwoods World Poker Finals and winning the WPT Season VI Player of the Year award.

While Jonathan offers private coaching, he does a lot of different types of coaching, starting with his books on Amazon. On his training site, FloatTheTurn.com, there are many pre-recorded videos, Q&A webinars, online seminars and more with more coaches than just Jonathan.

Amassing nearly $4 million in live poker winnings and $1 million in online winnings, Jonathan now had three homes, spends most of his free time in Las Vegas or with his family, who are often in the audience when he’s playing  in a big tournament.

Links from this episode

BRAVO Poker LIVE is a real time, responsive mobile app that is a breeze! You can check out the current live action and tournaments in your local card rooms. It’s linked directly into the Bravo poker room management system and shows you what games are being spread and how many people are on the waiting list. If you’re a serious poker player, you must use this app.

FREE download! BRAVO Poker LIVE mobile app is available for your iPhone, iPad and Android mobile devices. In fact, you can even put the app on your desktop…