Greg “FossilMan” Raymer joins Donna Blevins and talks about how he parlayed winning the 2004 WSOP© Main Event into a career playing poker and teaches students how to play better poker through his website FossilMan Poker Training. 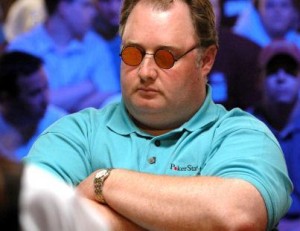 Donna Blevins and Greg Raymer also discuss getting back to the basics, luck (or lack thereof), playing smart and a further sprinkling of tips and knowledge from the “FossilMan”. He shares a bit about how his previous career and training influenced his poker game, how he found his way into poker and the book he recommends (hint: it’s The Theory of Poker by David Sklansky).

Other points that Greg and Donna cover during their chat:

Back in the school days, Greg played nickel, dime and quarter stakes games of friendly poker a few times a year. While in Minnesota, Greg made extra money counting cards at Blackjack tables around the state. After moving to Chicago and unable to find suitable Blackjack, he tried a few hands of $3-$6 limit poker. That was the trigger key that intrigued Greg with poker.

His career as a patent attorney began its sunset when Greg made a deal with his wife… to have a separate bankroll for his poker playing, and, if he lost his first $1000 investment,  he would give it up.

That never happened! He made a lot of money for his family, and, among other big wins, beat out everyone else for the World Series of Poker© Championship in 2004.

Greg is now a traveling poker professional going out on appearances, teaching, lecturing, and, of course, playing lots of poker tables and tournaments.

Links from this podcast: